Extra! Extra! Read All About It!

Articles featuring
The Can Van

Let us know how we can help you

The Can Van – Wineries explore new opportunities with mobile canning

The Can Van affords Northern California wineries the opportunity to experiment with cans, allowing winemakers to expand their wine programs and increase sales.

Here's how smaller local breweries – like Urban Roots – can their beer

Watch the beer canning process performed by The Can Van at Urban Roots Brewing in Sacramento.

If you're thinking of a local beer in a can, that image was likely made possible by Sacramento's Can Van, the unsung heroes of Northern California's craft beer scene who waited years for cans to become cool.

A close look at the 16oz can because you know you're seeing them everywhere.

The Van Behind the Cans

What's the most significant change in craft beer over the last few years? It's not a beer style, and it's not a brewery buy-out. It's canning.

Herrema and Coyle mastered the technical elements of canning early on, instilling confidence in the brewers who closely monitored their work in those initial canning runs.

Jenn Coyle, CEO of The Can Van

When Anchor Brewery needed its California Lager canned in a hurry before their own canning equipment was installed, they dialed The Can Van.

The Can Van: Mobile Canning for Craft Beer

As the first-ever mobile canning service for craft breweries, the Can Van brings professional canning equipment and expertise to small-scale brewers from Santa Cruz up to Redding and everywhere in between.

Canning Craft Beer and Hard Cider: To Go Mobile or Purchase a System?

Breweries are able to get their beer in cans when they need to, without sitting on idle equipment when they don't need it.

How good is canned wine?

'We wanted to show that you can put high-end wines in alternative packaging, and that they taste exactly same as they would coming from a bottle,' explains Gina Schober from Sans Wine.

Steely whites and light rosés aren't the only wines appearing in cans these days. You can find everything from Champagne-method Pinot Noir to tannic Petite Sirah.

Wine in a can: Convenient, exciting and eco-friendly, not uptight and snooty 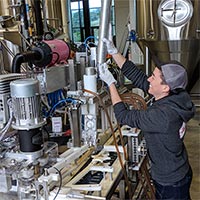 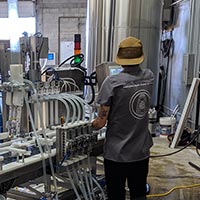 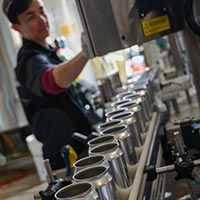